Learn more about the Cypress, Texas Real Estate Market. You’ll find the latest stats from HAR (our local MLS). Have questions or thinking about making a move? Let’s talk!

Here’s the link to get the stats!  October 2021 – Cypress Area Stats 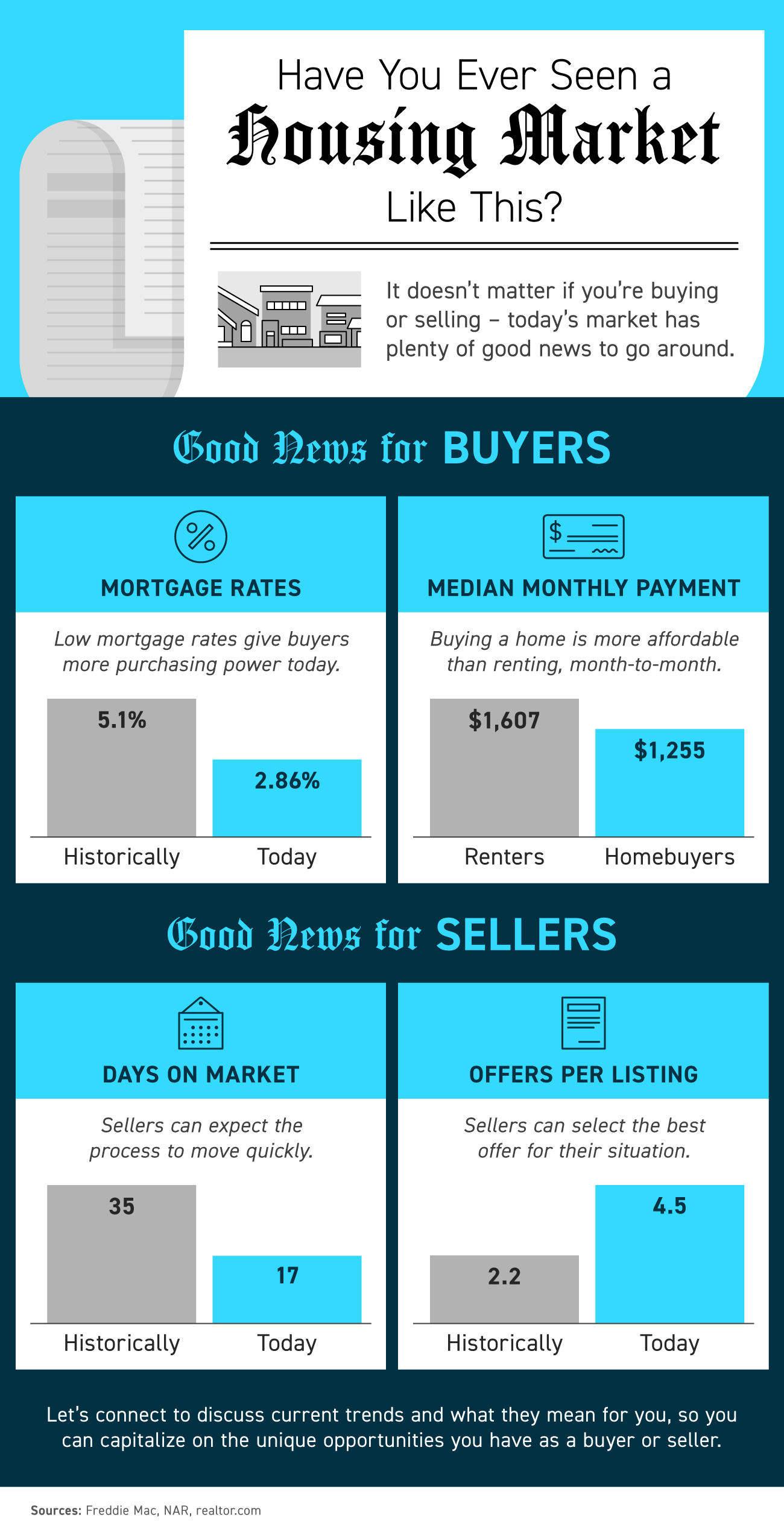 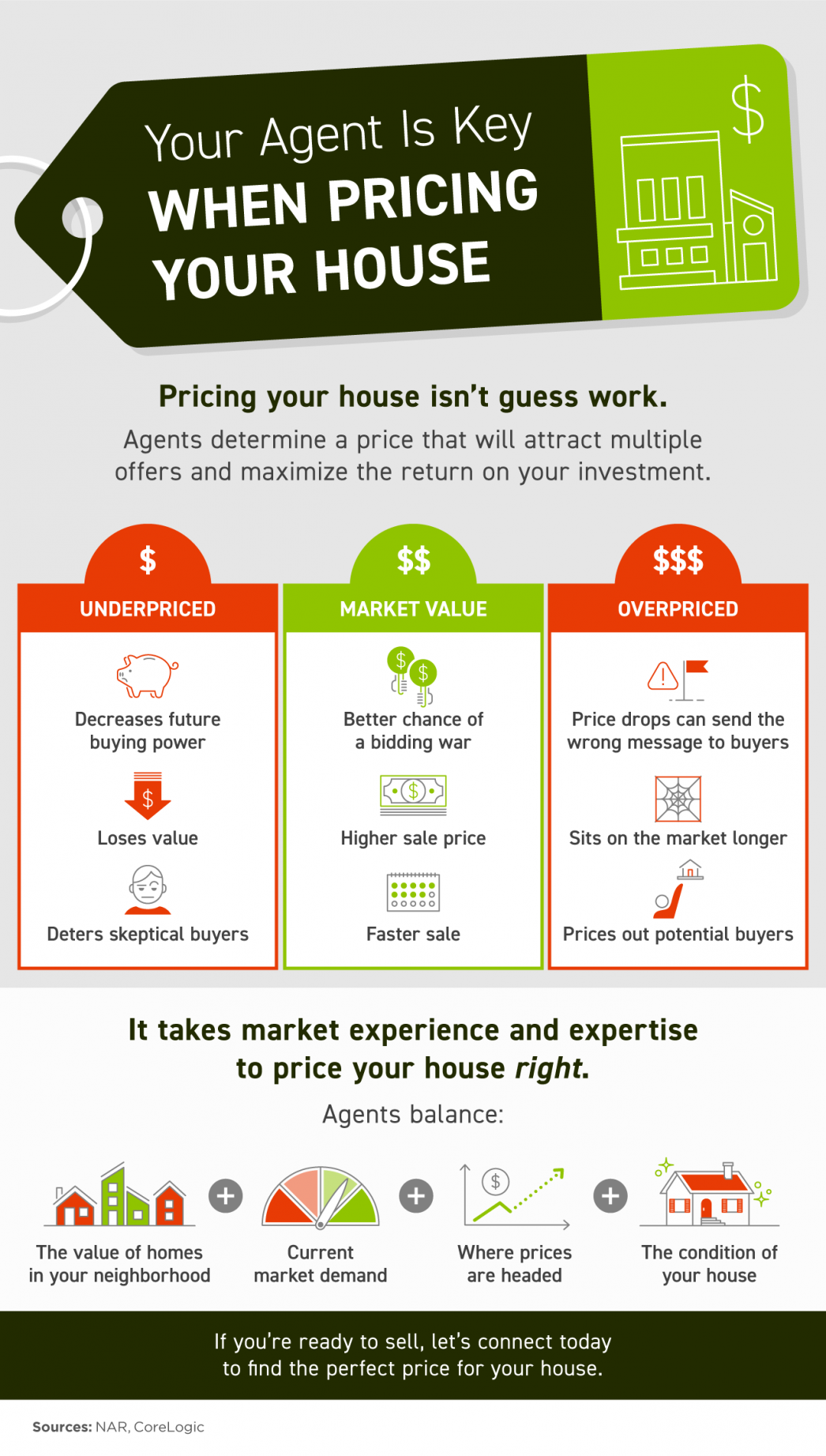 Whether or not you’ve been following the real estate industry lately, there’s a good chance you’ve heard we’re in a serious sellers’ market. But what does that really mean? And why are conditions today so good for people who want to list their house?

It starts with the number of houses available for sale. The latest Existing Home Sales Report from the National Association of Realtors (NAR) shows housing supply is still astonishingly low. Today, we have a 2.6-month supply of homes at the current sales pace. Historically, a 6-month supply is necessary for a ‘normal’ or ‘neutral’ market in which there are enough homes available for active buyers (see graph below): 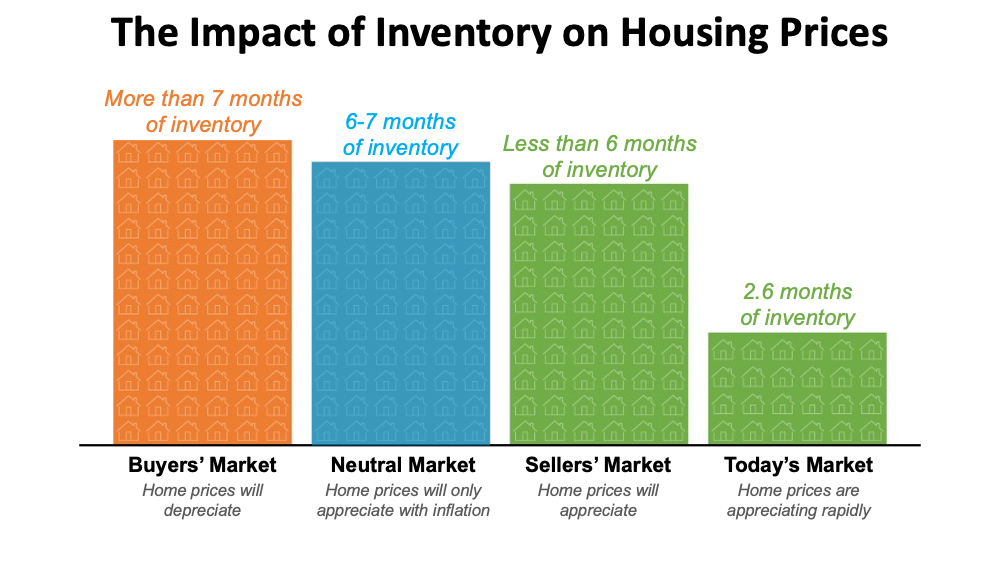 When the supply of houses for sale is as low as it is right now, it’s much harder for buyers to find homes to purchase. That creates increased competition among purchasers which leads to more bidding wars. And if buyers know they may be entering a bidding war, they’re going to do their best to submit a very attractive offer. As this happens, home prices rise, and sellers are in the best position to negotiate deals that meet their ideal terms.

Right now, there are many buyers who are ready, willing, and able to purchase a home. Low mortgage rates and the ongoing rise in remote work have prompted buyers to think differently about where they live – and they’re taking action. If you put your house on the market while supply is still low, it will likely get a lot of attention from competitive buyers.

Today’s ultimate sellers’ market holds great opportunities for homeowners ready to make a move. Listing your house now will maximize your exposure to serious buyers who will actively compete against each other to purchase it. Let’s connect to discuss how to jumpstart the selling process.

As we move into the second half of the year, one thing is clear: the current real estate market is one for the record books. The exact mix of conditions we have today creates opportunities for both buyers and sellers. Here’s a look at four key components that are shaping this unprecedented market.

A Shortage of Homes for Sale

Earlier this year, the number of homes available for sale fell to an all-time low. In recent months, however, inventory levels are starting to trend up. The latest Monthly Housing Market Trends Report from realtor.com says:

“In June, newly listed homes grew by 5.5% on a year-over-year basis, and by 10.9% on a month-over-month basis. Typically, fewer newly listed homes appear on the market in the month of June compared to May. This year, growth in new listings is continuing later into the summer season, a welcome sign for a tight housing market.”

This is good news for buyers who crave more options. But even though we’re experiencing small gains in the number of available homes for sale, inventory remains a challenge in most states. That’s why it’s still a sellers’ market, giving homeowners immense leverage when they decide to make a move.

Today’s ongoing low supply, coupled with high demand, creates a market characterized by high buyer competition and bidding wars. Buyers are going above and beyond to make sure their offer stands out from the crowd by offering over the asking price, all cash, or waiving some contingencies. The number of offers on the average house for sale broke records this year – and that’s great news for sellers.

The latest Confidence Index from the National Association of Realtors (NAR) says the average home for sale receives five offers (see graph below): 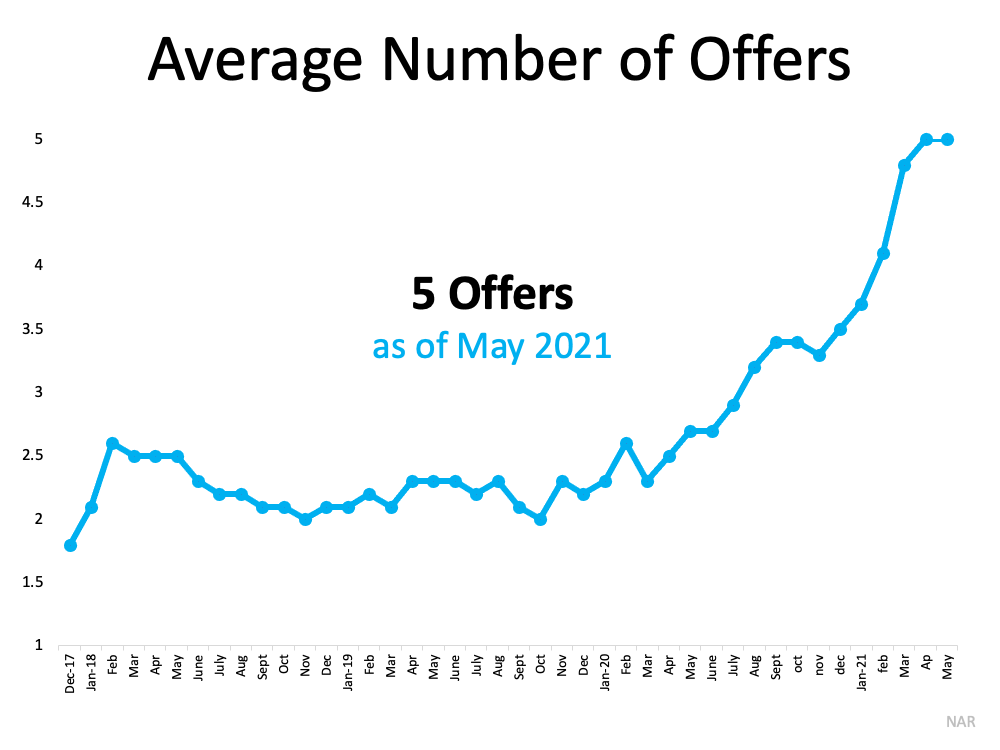 For buyers, the best way to put a compelling offer together is by working with a local real estate professional. That agent can act as your trusted advisor on what terms are best for you and what’s most appealing to the seller.

The competition among buyers is driving prices up. Over the past year, we’ve seen home price appreciation rise across the country. According to the most recent Home Price Index (HPI) from CoreLogic, national home prices increased 15.4% year-over-year in May:

“The May 2021 HPI gain was up from the May 2020 gain of 4.2% and was the highest year-over-year gain since November 2005. Low mortgage rates and low for-sale inventory drove the increase in home prices.”

Rising home values are a big part of why real estate remains one of the top sought-after investments for Americans. For potential sellers, it also means it’s a great time to list your house to maximize the return on your investment.

A Rise in Home Values and Equity

The equity in a home doesn’t just grow when a homeowner pays their mortgage – it also grows as the home’s value appreciates. Thanks to the jump in price appreciation, homeowners across the country are seeing record-breaking gains in home equity. CoreLogic recently reported:

“…homeowners with mortgages (which account for roughly 62% of all properties) have seen their equity increase by 19.6% year over year, representing a collective equity gain of over $1.9 trillion, and an average gain of $33,400 per borrower, since the first quarter of 2020.”

That’s a major perk for households to leverage. Homeowners can use that equity to accomplish major life goals or move into their dream homes.

If you’re thinking about buying or selling, there’s no time like the present. Let’s connect to talk about how you can take advantage of the conditions we’re seeing today to meet your homeownership goals.

As we enter the final months of 2020 and continue to work through the challenges this year has brought, some of us wonder what impact continued economic uncertainty could have on home prices. Looking at the big picture, the rules of supply and demand will give us the clearest idea of what is to come.</p

Due to the undersupply of homes on the market today, there’s upward pressure on prices. Consider simple economics: when there is high demand for an item and a low supply of it, consumers are willing to pay more for that item. That’s what’s happening in today’s real estate market. The housing supply shortage is also resulting in bidding wars, which will also drive price points higher in the home sale process.

There’s no evidence that buyer demand will wane. As a result, experts project price appreciation will continue over the next twelve months. Here’s a graph of the major forecasts released in the last 60 days: 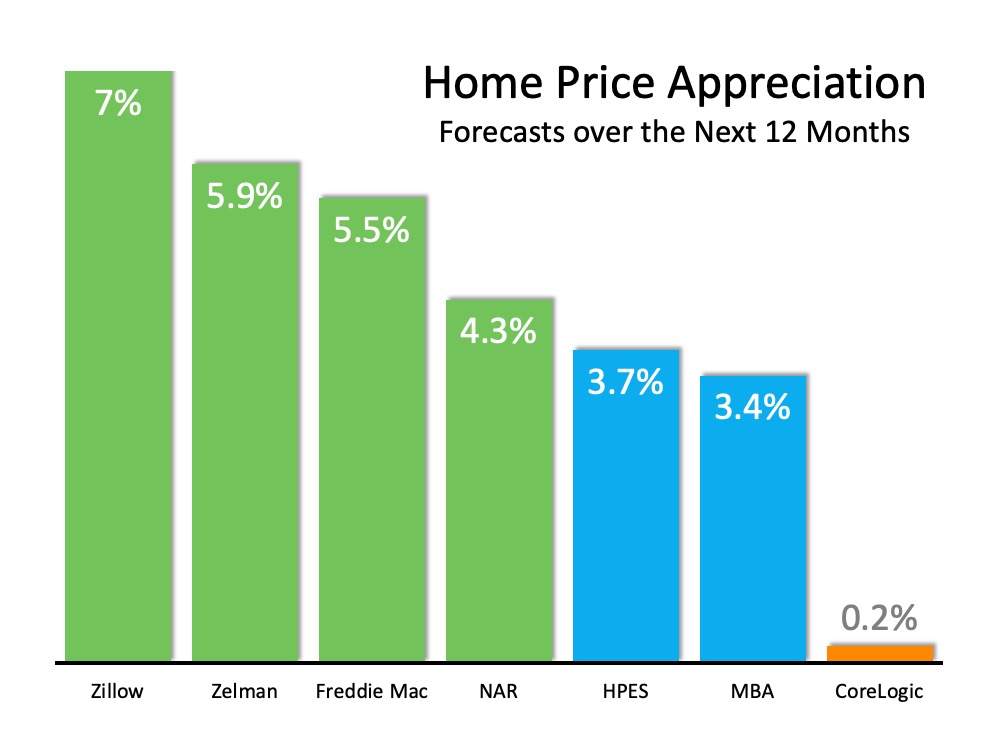 I hear many foreclosures might be coming to the market soon. Won’t that drive prices down?

Some are concerned that homeowners who entered a mortgage forbearance plan might face foreclosure once their plan ends. However, when you analyze the data on those in forbearance, it’s clear the actual level of risk is quite low.

Ivy Zelman, CEO of Zelman & Associates and a highly-regarded expert in housing and housing-related industries, was very firm in a podcast last week:

“The likelihood of us having a foreclosure crisis again is about zero percent.”

With demand high, supply low, and little risk of a foreclosure crisis, home prices will continue to appreciate.

Originally, many thought home prices would depreciate in 2020 due to the economic slowdown from the coronavirus. Instead, prices appreciated substantially. Over the next year, we will likely see home values rise even higher given the continued lack of inventory of homes for sale.

From Keeping Current Matters
Monday July 6th, 2020 For Buyers, For Sellers, Housing Market Updates
The Bureau of Labor Statistics (BLS) released their latest Employment Situation Summary last Thursday, and it again beat analysts’ expectations in a big way. The consensus was for 3,074,000 jobs to be added in June. The report revealed that 4,800,000 jobs were added. The unemployment rate fell to 11.1% from 13.3% last month. Again, excellent news as the unemployment rate fell for the second consecutive month. However, there’s still a long way to go before the economy fully recovers as 17.8 million Americans remain unemployed.

Here are two interesting insights on the report:

What about a supposed misclassification?
The BLS addressed this at length in a blog post last week, and concluded by saying:

“Regardless of the assumptions we might make about misclassification, the trend in the unemployment rate over the period in question is the same; the rate increased in March & April and eased in May.”

They specifically noted the issue in the latest report by explaining that if they adjusted the rate for the potential miscalculation, it would increase from 11.1% to 12.1% (which is lower than the adjusted rate of 16.4% last month). They went on to say:

Does the shutdown of parts of the economy skew the unemployment numbers?
Because the uniqueness of 2020 impacts the employment situation in so many ways, each jobs report is now examined with a microscope to make sure the headlines generated by the report accurately convey what’s happening in the job market.

One such analysis is done by Jed Kolko, Chief Economist at Indeed. He believes the extraordinary number of people in the “temporary” unemployed category confuses the broader issue of how many people have permanently lost their job. He adjusts for this when calculating his “core unemployment rate” (which subtracts temporary layoffs and adds unemployed who didn’t search for a job recently).

The bad news is that his analysis reveals that the number of permanently unemployed is still rising (from 4.6% in April to 5.9% last month). The good news, however, is when you use his methodology to look back at the Great Recession, today’s “core unemployment rate” is significantly lower (5.9% versus 10.5% in April 2010).

Bottom Line
Last week’s jobs report was much better than most expected. However, we should remain cautious in our optimism. As the Wall Street Journal explained in their analysis of the jobs report:

Some may question that assertion as they look back on the last recession in 2008 when housing was the anchor to the economy – holding it back from sailing forward. But even then, the overall economy did not begin to recover until the real estate market started to regain its strength. This time, the housing market was in great shape when the virus hit.

“Many still bear scars from the Great Recession and may expect the housing market to follow a similar trajectory in response to the coronavirus outbreak. But, there are distinct differences that indicate the housing market may follow a much different path. While housing led the recession in 2008-2009, this time it may be poised to bring us out of it.”

Fleming is not the only economist who believes this. Last week, Dr. Frank Nothaft, Chief Economist for CoreLogic, (@DrFrankNothaft) tweeted:

“For the first 6 decades after WWII, the housing sector led the rest of the economy out of each recession. Expect it to do so this time as well.”

And, Robert Dietz, Chief Economist for the National Association of Home Builders, in an economic update last week explained:

“As the economy begins a recovery later in 2020, we expect housing to play a leading role. Housing enters this recession underbuilt, not overbuilt…Based on demographics and current vacancy rates, the U.S. may have a housing deficit of up to one million units.”

Every time a home is sold it has a tremendous financial impact on local economies. As the real estate market continues its recovery, it will act as a strong tailwind to the overall national economy.