What are the hot trends to look out for in 2016 in home design? Here are a few predictions from the remodeling and design site Houzz on some of the big trends to expect.

1. Two shades of kitchen cabinets.
The upper cabinets may be a white or neutral but then more designers are trying out deeper colors or wood tones for the lower cabinets.

3. Multi-purpose kitchen islands.
The “workhorse” kitchen island is about more than just adding workspace in the kitchen, but also for adding more storage, prep sinks, and a way to add extra seating.

4. Mirrors that make a statement.
Medicine cabinets are heading out and now wood-framed, modern, or vintage mirrors are adding more style to bathrooms.

Rustic Kitchen
5. “Barely there” kitchens.
Kitchens are fading into the backdrop as the open layouts infuse more seamlessly into the living room or other spaces in the home. Aiding that trend, more kitchens are featuring open shelves to add to that openness.

6. Sunrooms are hot.
Houzz identified this as one of the top dream spaces for home owners. Some home owners are finding ways to even transform tucked away corners in their home into a sunroom with a few chairs to relax near windows.

7. White kitchens dominate.
White kitchen walls and cabinets and even countertops is a trend with staying power, Houzz predicts. To add some splash to the all-white kitchen, designers are adding touches of color through the tile floors or floor-to-ceiling bookcases.

8. Powder rooms get more bold.
Wall coverings are getting punched up in powder room, that include everything from custom graphics to textured walls. Also, designers are mixing in ornate chandeliers or furniture-like pieces to add some more pizzazz to these spaces.

9. Farmhouse style guides the entryway.
Farmhouse style is catching on, particularly for the mudroom. Simplicity in the storage solutions and durable materials are taking charge.

Wasting energy on Thanksgiving? Don’t be a turkey. 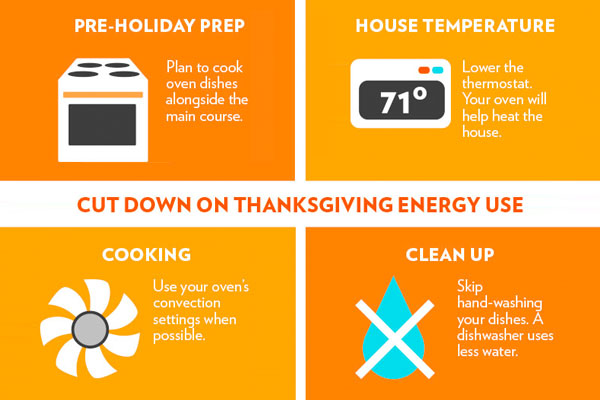 A Few Days Before Thanksgiving

1. Install a dimmer switch for the dining room chandelier. Every time you dim a bulb’s brightness by 10%, you’ll double the bulb’s lifespan. Most CFLs don’t work with dimmers, but you can create mood lighting with incandescents and LEDs. The dimmer switch will cost you about $10.

2. Plan side dishes that can cook simultaneously with the turkey. If you cook dishes at the same temperature at the same time, you’ll reduce the amount of time the oven has to be running — it’s easier for the cook and saves energy, too.

When You Start Cooking

3. Lower your house thermostat a few degrees. The oven will keep the house warm. You also can turn on your ceiling fan so it sucks air up, distributing heat throughout the room.

4. Use ceramic or glass pans — you can turn down the oven’s temp by up to 25 degrees and get the same results. That’s because these materials retain heat so well, they’ll continue cooking food even after being removed from the oven.

5. Use your oven’s convection feature. When heated air is circulated around the food, it reduces the required temperature and cooking time. You’ll cut your energy use by about 20%.

6. Cook in the microwave whenever possible. Ditto slow cookers. Microwaves get the job done quickly, and although slow cookers take much longer, they still use less energy than the oven. Resist the urge to peek inside your slow cooker: Each time you remove the lid, it releases heat and can add about 25 minutes of cooking time to your dish.

7. Use lids on pots to retain heat. The food you’re cooking on the stovetop will heat up faster when you use lids.

8. Scrape plates instead of rinsing with hot water. Unless food is really caked on there, your dishwasher should get the dishes clean without a pre-rinse. Compost your non-meat food waste. Check out these other Thanksgiving clean-up tips.

9. Use your dishwasher. It saves energy and water, so only hand-wash things that aren’t dishwasher-safe. Wait until you’ve got a full load before starting the dishwasher. Be sure to stop the appliance before the heated dry cycle; just open the door and let your dishes air-dry.

Courtney Craigis an Atlanta-based writer and editor. She believes no effort is too small when it comes to green living, which she tries to keep in mind while renovating her recently purchased first home. Follow Courtney on Google+.

It’s a good idea to hire a HVAC company to inspect and do maintenance on your system every fall and spring. They’ll do things like inspect and clean the wiring and mechanisms of the unit, which is bit more challenging for the average homeowner.

But you can prolong the life and increase the efficiency of your system if you follow a simple maintenance plan.

Some things you should do immediately; other tasks only need to be done seasonally or once a year. Here are the steps to a healthy HVAC system:

Daylight Savings Time in the US. – Spring Forward in 2015 on March 8th.

Currently, daylight saving time starts on the second Sunday in March and ends on the first Sunday in November, with the time changes taking place at 2:00 a.m. local time. With a mnemonic word-play referring to seasons, clocks “spring forward and fall back”—that is, in spring (technically late winter) the clocks are moved forward from 2:00 a.m. to 3:00 a.m., and in fall they are moved back from 2:00 am to 1:00 am.

A bit about returning to Standard Time – It’s Time to Fall Back!

With the New Year upon us, we start to plan and resolve to move forward with hope and even excitement.  It is also a good time to reflect on the year past.

It feels good to take a moment to laugh and smile at those moments with family and friends that gave you pleasure. If your year was full of challenges and difficult times, take time to say thanks for the strength that carried you through.

In Houston and the surrounding communities, many of us are fortunate to have a backyard pool or spa. For others the neighborhood pools offer a haven from the heat, a place to cool off and to enjoy a refreshing dip.

Unfortunately, every summer we hear news reports about drowning victims of all ages from toddlers to seniors. Many of these incidents could have been prevented if we all follow good water safety practices.

What are those practices… from the Red Cross website; I am sharing the best of best.  Visit http://www.redcross.org/prepare/disaster/water-safety for these and other helpful information –

Follow these safety tips whenever you are in, on or around water:
Make Water Safety Your Priority

Know What to Do in an Emergency

Mike Castleman, founder and CEO of Metrostudy, which tracks real-time data of the country’s inventory of new homes, says a housing shortage is looming that will soon will create a huge surge in demand for new homes. As such, now is the time to buy, he says.

In the 41 cities Metrostudy covers, 78,000 houses are either vacant and for sale, or under construction —that is less than a quarter of the new homes that fell in that category during the housing boom in 2006 and way below the level of a decade ago.

“If we had anything like normal levels of buying, those houses would sell in 2½ months,” says Castleman. “We’d see an incredible shortage. And that’s where we’re heading.”

The historic drop in new construction mixed with the decline in housing prices is laying the foundation for a dramatic recovery in residential real estate, Castleman told CNN. Castleman expects home owners soon will start returning, which will drive up prices in many markets later this year.

While demand remains low for new construction, he expects that to change. He foresees the recovery following a similar path as previous ones: A severe housing shortage will drive a big increase in demand.

“We’ll get a big surge in demand and the drywall companies will take a long time to ramp up, and it will take years to get new lots approved,” he predicts. “Buyers will show up looking for a house in a subdivision, and all the houses will be sold. The builders will tell them it will take six months to deliver a house.” But they’ll want the house so bad that they’ll “bid the prices up.”

The National Association of Realtors respond to a Jan. 1 Washington Post editorial about the idea of cutting the mortgage interest deduction. I’m as interested in deficit reduction as anyone, but I have serious reservations about actions that could dramatically harm the already fragile real estate market.
Removing this longstanding homeownership incentive just isn’t a smart move right now. Here’s an excerpt from the Jan. 2 letter submitted by Lawrence Yun (viewable here in its entirety):
“It’s a common misperception that the mortgage interest deduction benefits primarily the wealthy, as argued in the Washington Post’s January 1 editorial, ‘Trim the Excessive Tax Subsidy for Real Estate.’
“In fact, the MID actually benefits primarily middle- and lower income families. Sixty five percent of families who claim the MID earn less than $100,000 per year, and 91 percent who claim the benefit earn less than $200,000 per year. As a percentage of income, the biggest MID beneficiaries are younger middle-class families.
“… It’s no wonder, then, that most Americans support the MID. In fact, in a recent NAR survey by Harris Interactive of 3,000 home owners and renters, nearly three-fourths of home owners and two-thirds of renters said the MID was extremely or very important to them.”
Sent by NAR Chief Economist Lawrence Yun